I am a professional orchestral musician.

I play with the Canadian Opera Company orchestra. It took many years of experiences, failures, auditions, and adventures to get here.

I once showed up to an important concert with two left shoes. I wore them both, and put my best foot forward in spite of it. (Possibly, nobody else even noticed.)

I once dropped my #1 reed down the sink drain, just a few minutes before a very important audition. (Used #2 reed instead. Got the gig.)

I once flew 2,000 miles for an audition, only to sneeze backstage while eating a pecan. I had to play my audition with pecan stuck in my nose. (Did not get that gig.) Did the same thing with a carrot a few years later before a performance of Mahler #5 with a major symphony orchestra.

I studied Performance at McGill University (Licentiate Music Diploma, High Distinction in Bassoon) and at The Juilliard School (Advanced Certificate Diploma and Professional Studies). They taught me some marvelous things, but none of it helped me to play auditions with root vegetables or tree nuts accidentally lodged in my nose. For that, I completed certificates in Psychology from Ryerson University and Advanced Counselling Skills from George Brown College in Toronto.

Bringing a performing artist’s perspective to the practitioner’s side  of the fence, I specialize in training others in optimal preparation and the prevention and management of performance anxiety.

I teach preparation techniques and mental skills to other artists; they bring their best selves to the stage.

I have been through the trials and tribulations of auditions, performances, and competitions. With my audition and performing experience, plus an education in psychology and counselling, I understand what it takes.

Learn more about how to work with me.

(Got a doozy of a performing bomb under your belt? Share your stories here.) 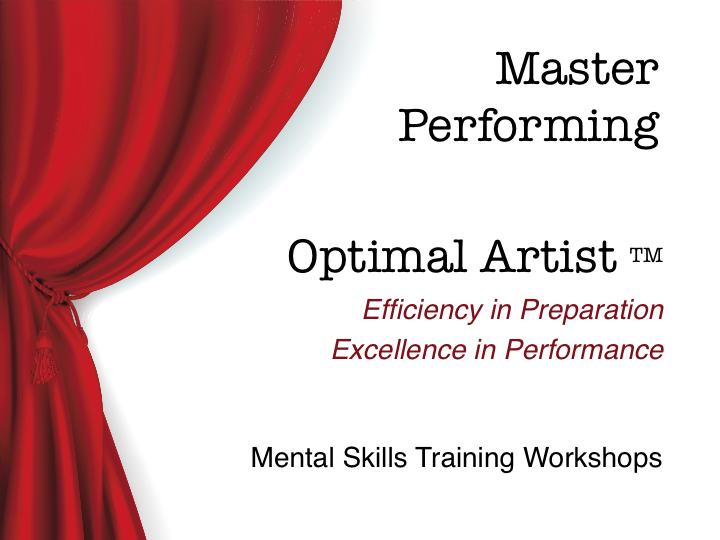 What other artists are saying: